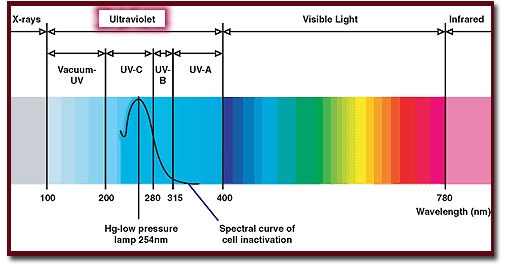 Ultraviolet light is a region of the light spectrum that is between visible light and x-rays. UV is invisible to us because our eyes are not sensitive to the wavelengths shorter than what we call purple, or violet. Although some people with XP are very sensitive to bright lights, the visible light region and infrared (i.e., heat) are not considered carcinogenic because their energies are too low (i.e., wavelengths too long) to cause DNA damage. UV must be avoided, but color and warmth even from the sun when properly filtered is generally low risk to XP. Our challenge is to filter or eliminate UV from the XP person’s environment.

UV is defined as the wavelengths between 100nm and 400nm. It is broken down further into three bands called UVC, UVB, and UVA, listed in order from strongest to weakest assaults on DNA.

UVC is the region below 280nm. Fortunately, UVC from the sun is absorbed completely by a few hundred meters of air. UVC from the sun is involved in the chemical process that creates ozone in our upper atmosphere. Accoding to many sources it is almost never found in nature. UVC is used in germicidal lamps to kill bacteria in water and air, but it is not a general lighting artifact.

UVB is the region between 280 and 320nm and is referred to as the erythemal UV band, also called the sunburning region. Measurements have been made of sunburn intensity on human skin that show the greatest sunburn response in the UVB region and then declines towards UVA wavelengths Measurements on DNA have also been made on cells and show a similar trend, that UVB causes more DNA damage per dose than UVA. The response of XP skin is the same, but because there is no repair mechanism the damage is cumulative and irreversible. Even in low doses, UVB presents the greatest risk to XP patients and should be filtered. The stratospheric ozone in our atmosphere greatly reduces the levels of UVB especially below 300nm, but the residual UVB is still very harmful. That the ozone layer depletion and global warming trends may worsen the filtering of our atmosphere should be of concern to all of us, not just XP.

UVA is defined as the waves between 320 and 400 nm. The region just greater than 400 nm is where our eyes first detect the color purple. In some literature, UVA is further divided into two regions, UVA1 (340 to 400nm) and UVA2 (320 to 340nm), in order to distinguish their potentially different biological effects. UVA2 presents the next greatest risk to XP patients, followed by UVA1. While UVA is overall less efficient at causing direct DNA damage than UVB, research is ongoing to determine its exact role in causing skin cancer through indirect paths. For example, it is thought that UVA reduces one’s immunity to skin cancer by lessening the expression of the cancer fighting gene, p53. UVA also penetrates deeper than UVB and is thought to generate excess free oxygen radicals that can lead to photoaged and wrinkled skin.

What are the main sources of everyday UV? The sun, shade, sun with cloud cover, sun through unfiltered glass windows, tanning beds, and many common artificial light sources such as fluorescent, halogen, and metal-halide lamps are all sources of UV harmful for XP. Halogen lights are commonly used in medical and dental offices and in headlights. Metal-halide lamps are used in stadiums and gymnasiums and represent a dangerous source of UV for even the general public if the outer bulb or fixture is broken. Blacklight is a strong UVA source and is commonly found in some museums or amusement park rides. See page on artificial light because there are ways to deal with many of these artificial light sources.

What are not UV sources in everyday life? The moon and stars, sun through glass windows with UV blocking film, low wattage incandescent light bulbs, filtered fluorescent tubes, blacklight created only from purple paint on incandescent bulbs, televeisions, plasma screens, computer screens, candle light, and camp fires are all not considered harmful for XP patients. For questionable sources, UV meters are used to determine if a light source is a significant risk when weighing quality of life.

Are Xrays as harmful as UV? No. Wavelengths below 100nm are not considered especially harmful for XP patients. The type of DNA damage that can result from Xrays are of a type that can be repaired as efficiently in XP cells as normal cells (P.R. Cook, 1978).