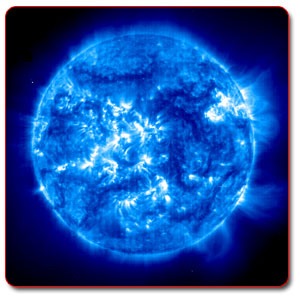 SOHO spacecraft image of the sun’s extreme ultraviolet rays, the UV band closest to X-rays, taken with a special camera

The biggest source of UV in the lives of people with XP is the sun. The sun emits its energy over all wavelength bands, from below x-rays, to the ultraviolet and visible regions, to beyond infrared (heat). It is the ultraviolet in the region of 280nm to 400nm that is of importance to managing XP.

The sun does not emit energy equally over the entire spectrum, but rather has what is called a blackbody spectrum. A blackbody radiator is a term that describes how energy is emitted from objects that are heated to very high temperatures. Any object that is extremely hot will emit visible light as well as ultraviolet. This is why even very bright incandescent bulbs will produce a reading on an UV light meter, however it is usually small. It takes temperatures in excess of 2,000 C, or 3,632 F, to produce a detectable amount of UV.

Sunlight at sea level has a temperature of about 5,500C. A 100 Watt incandescent light bulb will reach a temperature of 2,600 C and has measureable UV, but a hot camp fire will only get to 1,700 C and does not emit UV.

A graph of the sun’s energy output is shown above. The vertical axis represents the amount of energy, specified as Watts per square centimeter for each wavelength on the horizontal axis. This is called irradiance. The graph called “Extraterrestrial” illustrates the output as measured in space, outside our atmosphere. Fortunately, the Earth’s ozone layer filters much of the sun’s energy as can be seen in the “Sea Level” graph.

There is very little detectable UV on the Earth’s surface at 300nm, and it is virtually zero below 280nm. The UVB region shown in red is really only a small fraction of the total UV at sea level. There is typically about 20 times more UVA than UVB reaching the Earth. However, keep in mind that while UVB is relatively small in intensity, it is the most efficient at causing DNA damage. On the other hand, while the UVA region shown in yellow is less able to cause DNA damage, there is more of it so it can be equally harmful.

To understand how to compare the effects of UVA and UVB, one has to become familiar with biological effective UV measurements. This is a mathematical technique that weights the UV irradiance of each wavelength with its effectiveness at causing DNA damage and then adds them all up to arrive at a single number. One such measure of biologically effective UV is presented in the form of the UV Index.